As an avid basketball fan, March Madness is one of the most exciting times of the year. But does excitement for the tournament translate to viewer attention? For the second year in a row, we analyzed viewer attention to the tournament and will continue to monitor for the remaining games. Looking back on the round of 64 and round of 32, we noticed some interesting trends with real implications for advertisers:

1) Picking an upset in the tournament is hard to do, but it is a surefire way to maximize attention. The average attention index in games that were won by the lower-seeded team was 19% higher than those that went according to the script. But if it were that easy to pick upsets, we would all have perfect brackets right?

2) Heading into the round of 32, we expected attention to increase as tournament interest grew. This was not the case. Attention was fairly evenly distributed across days 1-4 with some of the most attention-grabbing games occurring in the round of 64. 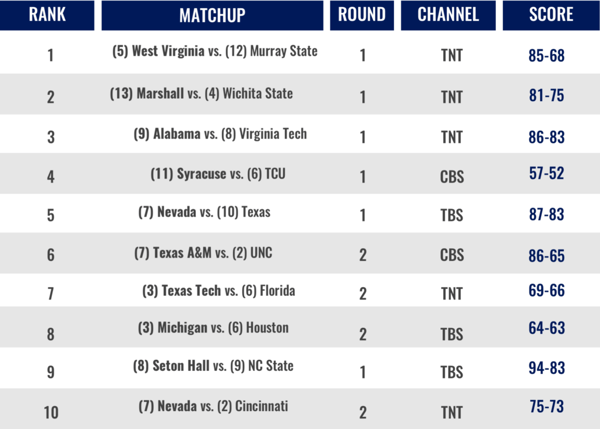 3) Time of day was the best predictor of attention. The early games consistently failed to capture audience attention. Advertisers should focus on games that run later in the day to reduce reliance on an exciting game to drive results.

4) But when an exciting game continues to the end, attention follows. Take a look at how Loyola-Chicago vs. Tennessee captures a crescendo of attention as a close game leads to a cliffhanger upset.

blog insights
Realeyes & TVision Partner to Expand Full Suite of Attention Metrics
Realeyes and TVision, leaders in attention measurement, will offer their customers access to a more comprehensive attention measurement stack that incorporates both companies’ solutions.
Read More
blog insights
Key Insights into the Future of TV and CTV at Luma’s Digital Media Summit
It was great to connect in person with so many media insiders and visionaries at LUMA’s’s Digital Media Summit. As always, the conversation at LUMA’s event was engaging and forward- thinking.  Here are my thoughts on some of the topics that bubbled up this week - namely alternative currencies, CTV growth and the enduring strength of linear TV.
Read More
blog insights
TVision’s New Ad Scoreboard Makes It Simple for Advertisers to Measure and Optimize with Attention
Real-time insights into viewer engagement with TV ads help marketers optimize campaigns, break through to engage audiences, and benchmark against competitors’ strategies.
Read More