Alexa: Should I Include a Celebrity (or Four) in My Super Bowl Commercial?

ach year, America’s biggest brands make large investments and bold creative choices to capture the attention of a nation during the Super Bowl. Being from ‘down under’, I watched very closely this year as Tourism Australia forked out more than $5m in tax dollars for the placement, and pulled in the services of a veritable who’s who of Australian celebrities. While a cleverly disguised promo for a reboot of Crocodile Dundee, the ad didn’t even crack the top 10 for viewer attention, as we reported Monday.

So that invites a question: Is it worth paying a celebrity (or celebrities) an exorbitant fee to appear in a Super Bowl commercial?

Our analysis shows that the answer could be yes.

In today’s ever-more-distracted viewing environment, it’s challenging to find an effective advertising trigger—something that actually compels the viewer to lock eyes on the screen. It could be a Pavlovian catch phrase, like Bud Light’s “Dilly! Dilly!” campaign. Or a dose of special effects, like the flames in this Doritos Blaze spot.The challenge of finding an effective trigger is magnified during the Super Bowl. To understand why, picture any gathering for the big game that you’ve ever attended. Between the chitchat and the chip and dip, distractions are unavoidable. If nobody is paying attention, that is a really expensive block of dead air.

The celebrity cameo is a time-tested technique for snagging viewer attention. The logic is simple: a familiar face is more likely to draw looks than an unfamiliar one.

But it isn’t enough to momentarily attract the viewer’s attention with a celebrity cameo. To be effective, the celebrity’s appearance also has to establish brand awareness. If viewers remember the star but not the brand, what’s the point?

To analyze the effectiveness of celebrity appearances, we did a second-by-second breakdown of Amazon’s Alexa Loses Her Voice ad. At 90 seconds, and featuring appearances by five celebrities (six, if you count Alexa). This was the commercial equivalent of an epic Hollywood blockbuster.

In case you missed it, here’s the premise: Alexa, of the Amazon Echo family of devices, loses her voice. The company scrambles to line up celebrity replacements. Comedy ensues.

As humor, the premise clearly worked. But is it an effective advertisement?

The graph below illustrates the peaks and valleys of viewer attention throughout the ad. Note that there was a fresh spike that pushed viewer attention above the average level as each celebrity appeared. In order, the celebs were: Jeff Bezos, one of America’s most-recognized businessmen; Gordon Ramsey, the foul-mouthed celebrity chef; Cardi B, the breakout rap star; Rebel Wilson, the comedic actress from Australia (Score one for my home country!); Cardi B again; and finally 80-year-old Anthony Hopkins, reprising his role as Hannibal Lecter in the 1991 fright flick The Silence of the Lambs. (Note that this mix of talent cuts across generations and genres, ensuring maximum appeal.) 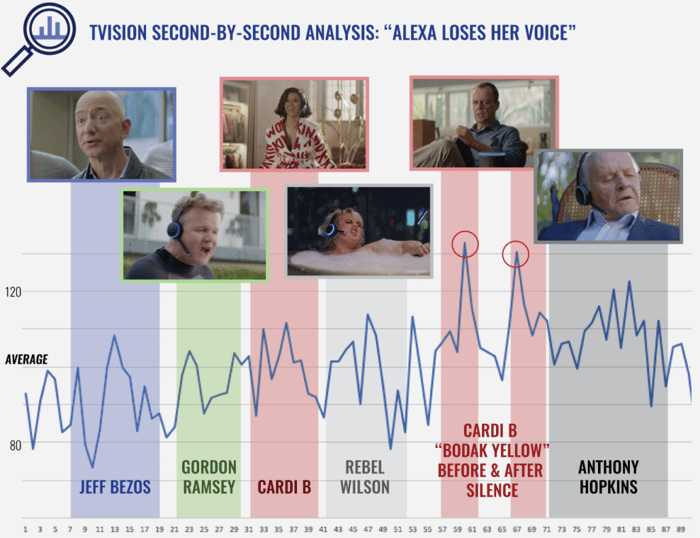 A particular triumph here is that the ad not only captured high attention, but also that the peak was a whole minute into the airing. The gap in the peak segment was that Cardi B played her rap hit “Bodak Yellow” in response to an older man’s command, “Alexa, play country music.” At this point, the viewer is conditioned to expect a celebrity at the mere mention of the phrase “Alexa…”.

Brand awareness is, of course, the whole point and Amazon cleverly capitalizes on each of these spikes in attention. Each celebrity was pictured wearing a stylized blue Echo headset, expertly pairing on-screen branding with the moments that matter. Finally, we get to meet the true star of the show, with Alexa regaining her familiar voice and announcing, “Thanks, guys. But I’ll take it from here.”