Commercials are expensive to produce. When they work, the spot is often adjusted for shorter :15 and now :06-second formats. But the value of the work can fall to the cutting room floor if the creative team doesn't know why the original was so powerful.

TVision Insights used its second-by-second attention data to analyze the audience's reaction to the :30, which was funny, engaging, and captured a high Creative Attention Score. As the chart on the right shows, there were several points in the ad when attention spiked. At each point, there was a visual or auditory cue that coincided with the attention increase. A bell rang, flames shot up, the police busted down the door. Each caused the audience to watch more closely.

These action-movie stylings captured and held the viewer’s attention. But some of these were edited out of the :15-second version, diminishing the impact of the original creative concept. This understanding of second-by-second attention to the screen is critical to making every version of the creative execution grab the viewers' interest. 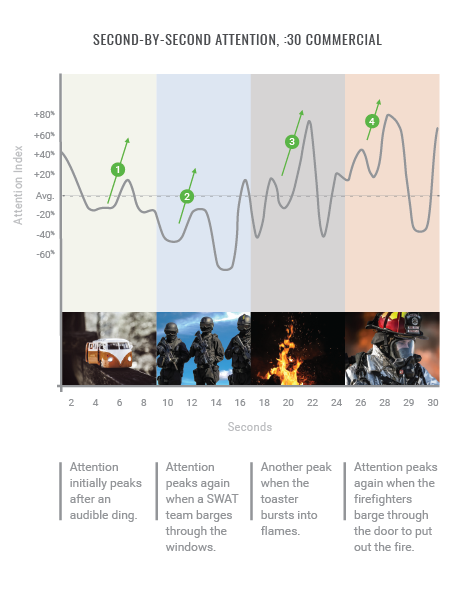 Unlike tune-away or inferred attention data, eyes-on-screen attention data helps identify the most powerful moments of a creative concept and retain impact when longer commercials are edited for distribution.

With TVision Insight's attention data, brands get in-market evidence of what drives eyes-on-screen attention. Cutting down a :30 to a :15 should be done carefully to maintain the best seconds of the longer creative concept. The triggers for attention make sure viewers stay tuned to see the full message.

Want to learn more about how to analyze your own attention triggers? Contact us.