Go Back to School On Measuring TV Viewer Attention

If a TV commercial is aired but no one is watching, did it make an impression? That is the kind of question back-to-school advertisers ought to ask as they navigate the modern media landscape. And in case you don’t already know, AdAge reminds us that back-to-school is the second most important shopping season of the year.

For advertisers looking to reach parents and children during the back-to-school season, it’s imperative to know when they are actually paying attention to the TV, versus when it is simply on in the background. The level of viewer attention differs significantly when you look at the data by age and household composition.

To answer this question of who pays the most and least attention by demographic, TVision Insights took a look at the attention levels of all age groups during Q2 2017. As seen below, viewers under 18 pay the least amount of attention to TV commercials, followed closely by parent-age viewers. 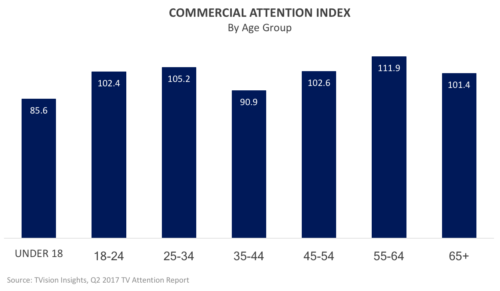 For that important but inattentive age group of 35-44 year olds, we also did a comparison of how parents watch TV vs. those without kids in the household. Throughout the second quarter of 2017, we learned that parents pay 8% less attention to the TV (i.e. 8% fewer eyes-on-screen seconds) than non-parents.

The challenge for media planners during the all-important back-to-school season is how to engage those audiences that matter to them -- parents and school-age kids -- with the efficiency of TV advertising. So, who’s winning? We looked at ads promoting back-to-school, and analyzed which were able to capture attention from this easily-distracted audience. 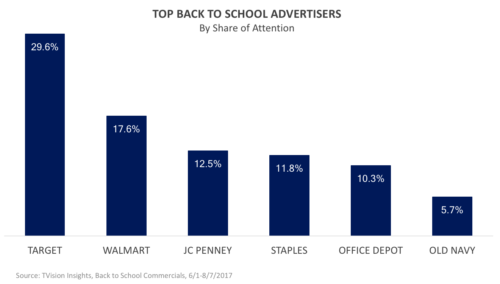 As you can see, Target was the clear winner. The retailer achieved a 29.6% share of attention that households with children spent viewing back-to-school commercials. Reviewing their ads, a deeper analysis of their creative showed the use of bright colors, simple stories, and the use of children in their ads as factors that contributed to their ability to draw the audience in.

Target’s ability to secure significantly more attention than competitors shows clear ability to design creative that speaks to the back-to-school audience and plan effectively to engage that audience. In today’s fragmented media market, attention is more important than ever.