The rapid shift in the way people have consumed content during the coronavirus pandemic underscores the need for actionable real-time TV engagement data.

Recently, TVision analyzed the television-viewing data we’ve compiled since COVID-19 hit. It revealed some findings you might expect — and many you might not.

The longstanding TV advertising ecosystem is upended. Programming and ad buys are typically planned months in advance. That’s not an approach conducive to absorbing shocks like the COVID-19 outbreak, which disrupted production schedules, canceled live sports, and altered the way TV advertising is bought and sold during Upfronts.

Let’s take a closer look at what just happened.

As always, we need to start by separating those who are actively watching TV from those who just have the TV on.

Our unique methodology enables us to determine viewer engagement at a level previously unattainable. We measure not just which programs are on in a given household. but also how that programming was delivered. We can also tell how many viewers there are at a given moment —and whether or not they’re actively looking at the screen.

The TV viewing pattern during the pandemic has revealed Americans have the TV on a lot more often.

On a typical Tuesday before the pandemic, viewership hit a daily low around 4:00 a.m., saw a morning news-time increase,  then climbed throughout the day, peaking around 8:00 p.m., at the height of prime time. Since stay-at-home orders went into place, the overall audience has been significantly higher — especially during daytime hours. The amount of time viewers spent with the TV on between 10 a.m. and 5:00 p.m increased by 77%, to a level more like a pre-COVID-19 Sunday than a Tuesday.

With so many more people at home, we set out to determine how often TV’s were on during the day but unwatched, like the proverbial unheard tree falling in the forest. Yes, viewer attention decreased during that same timeframe — but by just 3.7%. So opportunities for a much greater advertiser reach outweigh the slight decline in viewer engagement.

Teasing out the opportunities.

A more granular analysis reveals specific opportunities that have surfaced — along with the need for a more agile method of responding to shocks in the TV advertising ecosystem.

Let’s break the findings down into two specific categories:

Average daily consumption of OTT services such as Netflix has doubled during the pandemic. OTT typically rates high in both co-viewing and individual viewer attention. Add the increased number of housebound Americans, and you had an environment ripe for explosive growth. The performance of recent releases such as “Tiger King,” a polarizing documentary that audiences were twice as likely to pay attention to as an average TV offering, was impressive.

TV advertisers are eager to reach this growing OTT audience. The good news is these OTT viewers are also paying attention to linear TV. Using available data, advertisers can plan more effective linear campaigns aligned with those OTT audiences. Opportunities such as AVOD — advertising-based video on demand — are also worth investigating.

As networks created substitutes for those missing sports broadcasts, the old rules still applied: viewability, as well as tuning, remains critical. Although a fair amount of TV sets were tuned in to the NFL draft, rejiggered for a remote environment, it scored relatively low in viewability. ESPN’s showing of the Michael Jordan documentary “The Last Dance,” on the other hand, performed well above what we’ve come to expect from linear programming. 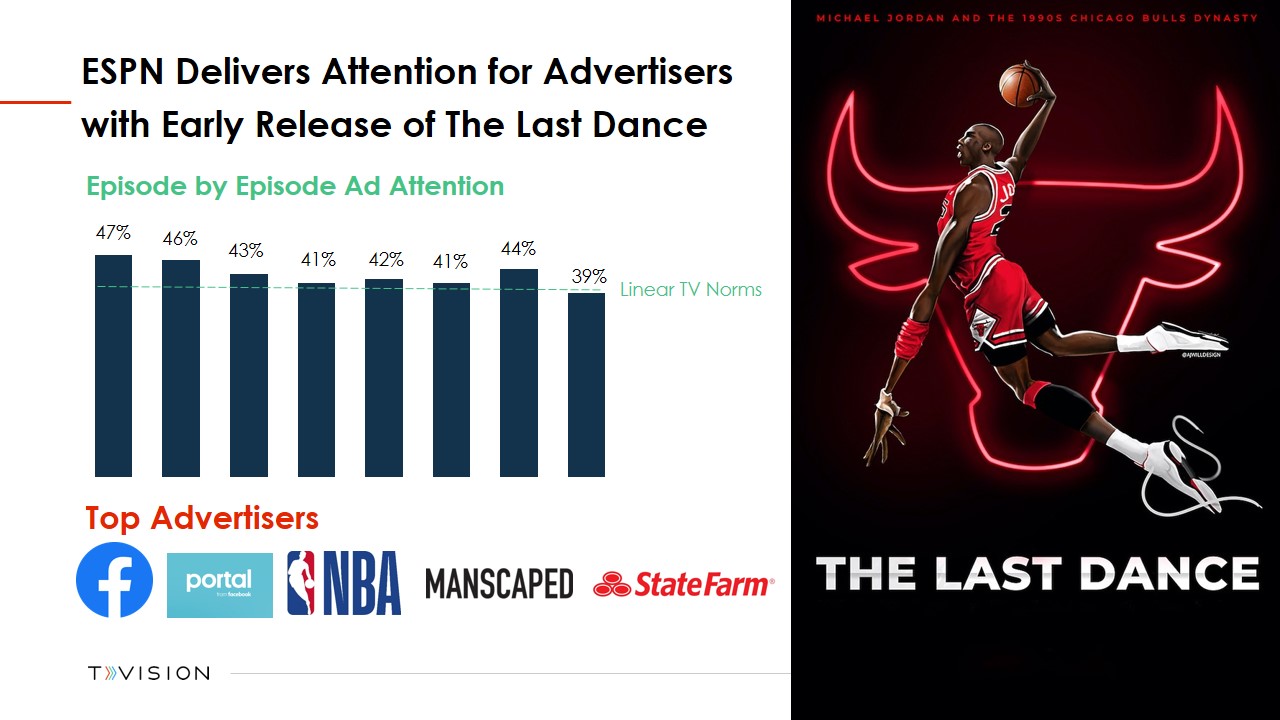 “The Last Dance” is an example of the kind of nimble response the industry needs to survive future shocks. The Jordan documentary wasn’t scheduled to air until the summer, after the NBA Finals. But with basketball shut down and fans starved for content, ESPN moved “The Last Dance” up to fill a void during our COVID-19 spring. TV execs aren’t used to calling that kind of audible — but they must get used to it in our rapidly evolving media landscape.

Brands Reacted Quickly with COVID-19 Ads, but Wear-Out Hit in May. 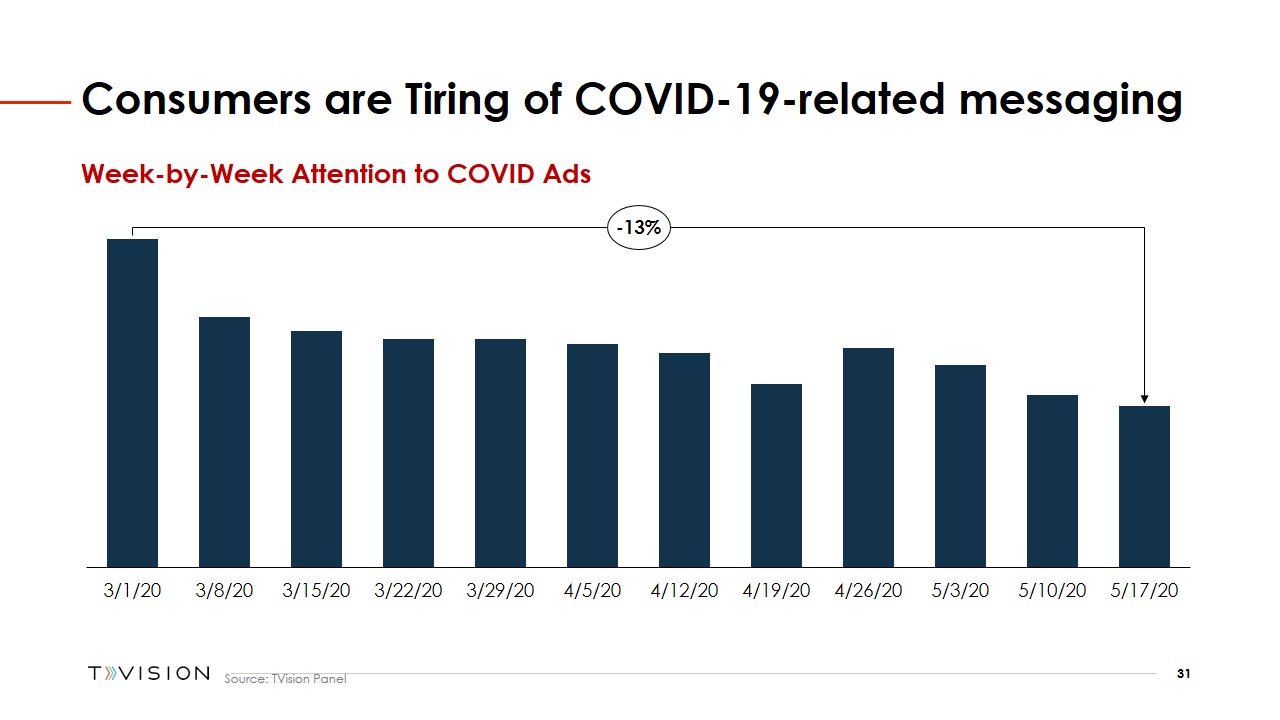 Perhaps fearful that their standard commercial messages would come across as tone-deaf, many brands quickly created COVID-19-themed ads as the pandemic grew. While these ads are a good example of agility, a nimble response and brands’ social conscious, the overall impact of the ads is less clear. Most of the COVID-19 ads captured similar attention for brands as their non-COVID ads.

One thing that did become clear, however, was that attention to these COVID-19 commercials waned fairly quickly, with an overall drop of 13% between March and May. Ads that ran later in the stay-at-home period generated less attention, possibly due to message saturation, or simply because viewers had tired of COVID-19 ads in general.

To learn more about TVision’s insights into viewer habits during the pandemic, watch the complete webinar here.