To attract and retain an attentive audience, creative brands need to craft TV messages that are timely, anticipatory, and engaging. In Q2 2018, we saw seasonality had a big impact on breakthrough, especially for spring movie promotions ahead of the summertime.

Creative Attention Score (CAS) measures an ad’s ability to break through by normalizing for the average attention of the surrounding commercial pod. This allows us to better understand the quality of the creative itself, isolated from contextual factors, such as when the ad airs and the show it runs inside.

In Q2 2018, we saw three movie trailers—Isle of Dogs, Rampage, and Incredibles 2—were in the top 10 primetime ads for attention ahead of the summer blockbuster season. Isle of Dogs was the top movie trailer of the quarter and the second-highest attention-grabbing ad overall. It may or may not have also been that cute talking dogs are more engaging than giant gorillas and super-powered babies.

Reinforcing the idea of seasonal anticipation, we also saw Nissan Rogue’s high-performing ad was a tie-in to the new Star Wars film Solo, featuring stars from the ABC comedy Black-ish.

Our rankings include national 15- and 30-second commercials that ran during primetime on broadcast and cable in Q2 2018.

Additionally, we saw strong performance in Q2 from Sony Pictures (#5 overall across brands) as viewers geared up for summer by paying attention to Sony’s ads for high-budget films to come. 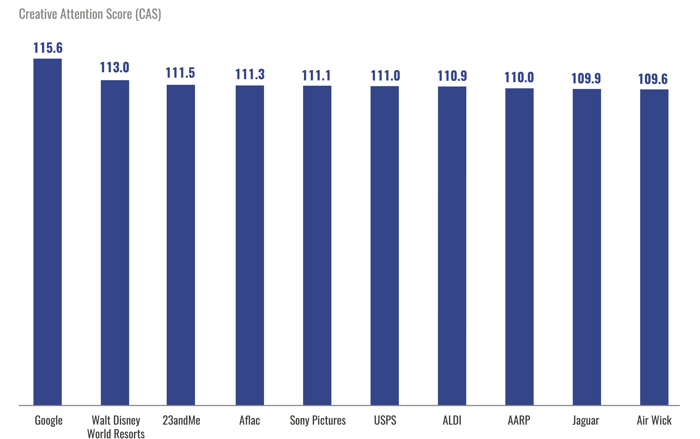 To achieve strong attention breakthrough with your target audience, keep seasonality top of mind when crafting your messaging.