The Brands that Get Noticed.

Getting Attention and keeping it - it’s the advertiser’s biggest challenge. Some brands out there are making smart calls on their ad buys, and targeting their spends with laser precision, yielding high Ad Attention. Some brands are hitting as often as they’re missing. Some brands aren’t even registering at all.

So what’s the secret? What can Ad Attention data really show you? We busted out our cutting-edge tools and focused on figuring out which brands were really getting the engaged  audiences they want -- and which ones were falling short. With data like that in your hands, a brand like yours can do amazing things. Let’s take a look.

Our analysis showed us that health brand Cologuard was a big winner over many others; it appeared in both top 10s for Ad Attention, leading the way in the latter at 49.7%. Levi’s, T-Mobile, and Subaru also appeared in both lists. Ironically, embattled e-cigarette brand Juul scored highest in (particularly for female audiences; see below), but failed to crack the top 10 for overall Attention.

Which brands connect best with men and women?

Drilling down further to a person-level, our data showed a fascinating disparity between male & female Attention, with very few brands appearing in both analyses. Only Vanda Pharmaceuticals and T-Mobile appeared in the top 5 for Attention for both men and women, while only Cologuard cracked both top 5s for Overall Attention. Juul kept women in the room at the highest rate (81.3%), whereas male audiences were held fast by Navage at 79.1%. Women were most Attentive to Cologuard (51.3%), while men paid most Attention to Xfinity (48.4%). 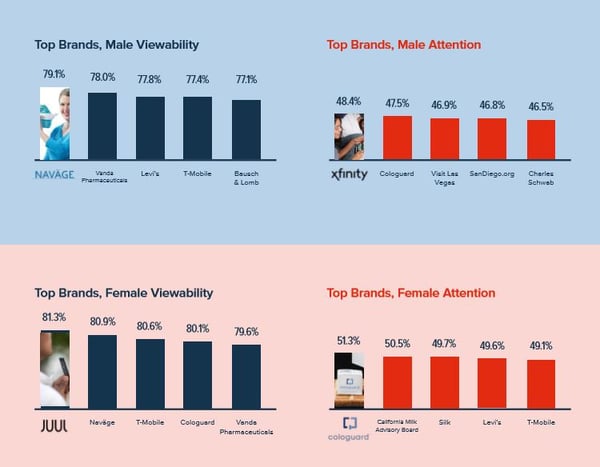 Smart calls on media spends, based on solid data on Attention, can mean a world of difference for a brand that wants to make its mark in an ever-evolving landscape.

Download the H1 2019 TV Engagement Report and let’s talk about how our high-tech tools and insights point your brand towards incredible success.