Total Retail: Back-to-School Ads Are Everywhere. But Whose Ads Are Actually Getting Seen?

By Raman Sehgal, VP of Marketing at TVision. Originally published in MyTotalRetail.com.

It’s that time again. New outfits, new class schedules. Time to pack backpacks and lunchbags. The lucrative back-to-school season ramps up quickly, and with every passing year, making smart choices in ad buys is increasingly crucial. With more distractions than ever, how can brands stand out with a compelling value proposition that drives impressions and sales? What’s the sweet spot that delivers results?

Measuring how people really watch TV used to be a guessing game, at best. But the times have changed, and so has the technology. Now, we can gather data that delivers a deeper insight into viewership than ever before. Cutting-edge technology has enabled us to measure TV ad attention — person by person, and second by second. We analyzed ads from key advertisers and discovered quite a lot about how commercials from the world’s biggest retailers are performing doing during the back-to-school season.

Which Brands Rise Above?

Between July 15 and August 18, TVision’s always-on, passive measurement systems gathered valuable data about ad attention. The champs during this period? HP, Amazon.com, and Ikea. Interestingly, while Dell came later in the list, technology tended to creep towards the top for both attention over more traditional retailers like Macy’s, Old Navy, Target, and Kohl’s. 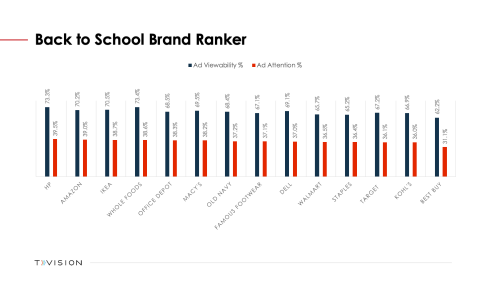 Going Deeper With the Data

Just knowing who was on top was interesting enough, but brands want to know more. What was resonating with target audiences? What was making viewers pay attention? We took a hard look at ads from those top three brands — HP, Amazon, and Ikea — to find out.

Individuality is the idea driving HP’s 30-second back- to-school ad. The focus is on a series of young people whose quirky yet relatable behavior is depicted with style, movement and color, scored with Tommy James & The Shondells’ classic, “I Think We’re Alone Now.” The ad celebrates odd yet deeply human and relatable moments through its tagline, “Be you. Nobody’s watching.” The fast cuts and colorful movements cause attention to grow throughout the ad, ultimately peaking at a key moment of HP branding.

The power of connectivity is at the core of Amazon’s ad for its Amazon Echo smart speaker. The device is depicted as the critical link between two friends who are separated when leaving for college. Our analysis showed that while fast cuts and stop-and-start music cues in the beginning of the ad cause viewer attention to spike, attention wanes as the story becomes more emotional. As with the HP ad, fast cuts, colorful compositions, and unpredictable sound design help capture viewers’ attention.

Parental love — and fear — figures in Ikea's back-to-school ad. As a young girl is shown fixing up her dorm room, a voiceover introduces viewers to the idea of using Ikea's products as a way to equip their children with the right bedroom essentials for the next phase of their lives. A fun twist occurs when the girl invites a boy inside, at which point the voiceover begins objecting to everything that’s happening. Our analysis showed that this clever turn increased attention, but didn’t cause spikes like the stop-and-start music in the Amazon ad.

The ability to measure person-level exposure helps illuminate how back-to-school advertisers are breaking through with both parents and students. To see where your brand stacks up, download TVision’s TV Engagement Report.