Where to Find Sports Fans Now

There isn’t much in the world that COVID-19 hasn’t impacted. We hope for the health and safety of our colleagues, clients, family, friends, and all those on the front-lines of this battle.

The COVID-19 pandemic is bringing change to all of our lives, including our professional lives. In just one week nearly every major U.S. sports league canceled its season, and now the Olympics have been delayed by a year, forcing brands to reallocate billions of dollars worth of television ad buys. The 2020 NCAA Men’s Basketball Tournament was expected to command hundreds of millions of dollars all on its own, with brands set to pay around $2 million each to advertise during the championship game, and the postponement of the Olympics will push $1.25 billion in ad dollars to 2021. In response, advertising leaders at brands like AB In-Bev are already making changes to allocate advertising in other ways that can support pandemic response while still reaching their target audiences.

Strategies are shifting accordingly but advertisers cannot put off their advertising until next year. While the games may be canceled, advertisers still want to connect with the audiences who were planning to watch them. At TVision, we can help our clients adjust media plans to account for these changes.  By leveraging data about where audiences are truly engaged advertisers can identify live sports viewers and reach them across the other TV programs they engage with.

If you’re unfamiliar, TV Attention measures whether a consumer is in the room while an ad or program airs on-screen, and Attention data tells us when the viewer is paying attention to the TV. TVision collects this data by monitoring an opt-in, privacy-safe panel of television viewers with our cutting-edge computer vision technology. We’re able to identify when consumers are in the room and when they’re looking at the screen, on a second-by-second basis for every moment of broadcast, cable and OTT television viewing.

While sports are uniquely capable of delivering large, live audiences, viewers typically pay less attention to them than they do to other content. By reallocating spend to other programming, advertisers can reach the same viewers in more engaging environments, frequently at lower ad rates, yielding higher attention to their advertisements.

TVision reports that a high density of sports viewers are paying higher levels of attention to shows across a few key segments and notably, doing so throughout the day.  By analyzing what else people watch and how those demographic groups engage with TV content, we found several opportunities for advertisers to engage this audience and often at significantly lower costs than live sports.


While these programs may not yield the same size audiences as large live sports events, finding a more engaged audience across a number of shows can yield better outcomes.

Using Data To Adapt and Succeed in Any Advertising Environment

We are in exceptional times and, as such, advertisers are forced to rethink their strategies. But this approach - identifying and targeting viewers based on engagement and attention, across segments and dayparts, can help maximize media spend any time. In fact, the power of attention data extends far beyond the sports world. Advertisers can even use these tools to reach the audiences of break-out OTT shows that don’t sell advertising themselves. For instance, Polaroid could use the tactics described above to reach Stranger Things fans during the linear TV shows they’re most likely to watch and pay attention to. 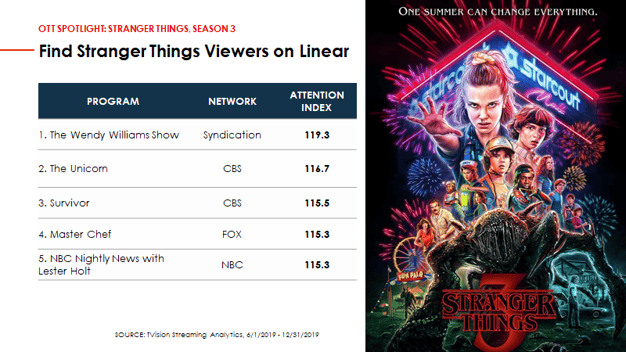 Across the country, we all want our live sports back and, more importantly, a return to normalcy in our daily lives. But, until then, those of us in the advertising industry must react to changing circumstances as best we can. For advertisers that means leveraging all the tools at their disposal.

Whether advertisers need to reallocate their ad dollars on the same network as canceled sports content, or take a fresh look at their holistic ad plans, determining how to reach their target audience where they are most engaged reaps the most rewards. 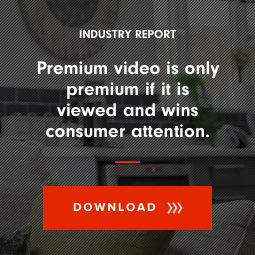